Kurt Sutter is one amazing writer. He created THE best show on television today, "Sons of Anarchy". If you have not tuned into this show, do so and fast because sadly this is the last season. There are only four more episodes left. 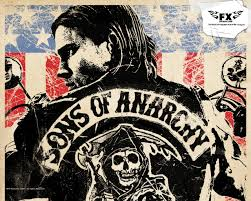 I have been glued to my set every Tuesday night. I wake each Tuesday morning- happy, knowing that by the end of the day, I will see Gemma, Jax, Chibbs, Bobby, Happy, Juicey, Rat and Tig. Sutter is such a brilliant writer that these characters attach themselves, flaws, Harleys, and diabolical loyalty to your soul.

Seriously not since David Chase's the "Sopranos" have I been this hooked on T.V. I am a junkie, an anarchy junkie and I proudly admit this. It is not often that writers are consistently this good, where their writing, season after season remains impeccable and their characters believable,

Yet, Sutter remains on top of it all. I have also been watching old seasons just reliving the glory before the Club says goodbye to living rooms everywhere on December 9th..

Sutter is a huge Shakespeare fan.  But then again, what writer worth his words doesn't appreciate the genius of Shakespeare. It has been written that Sutter has modeled "Sons of Anarchy" after Hamlet. And as much as I love this idea, I pray it isn't so. We all know how Hamlet ends. I don't want that for SAMCRO.

If you are a Sons of Anarchy fan you have elevated yourself to perfection in my book.

Writers- they take all shapes, work in several industries but Sutter is the fairest of them all!

Sons of Anarchy every Tuesday night at 10pm on FX.