Movie Review ** a bit of a spoiler alert

There is not a better actor in film today than the wonderful, Ryan Gosling. 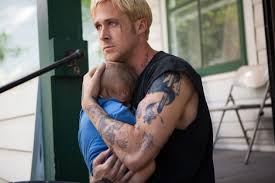 In "The Place Beyond The Pines" he gives another polarizing performance.


The movie starts off with Gosling, a chiseled, tattooed motorcycle risk taker, working in a traveling fair. It takes no time at all to realize that Gosling is a risk taking loner. He is mysterious and confident and by the looks of it a criminal with nothing to lose.

Eva Mendes shows up within the first twenty minutes of the movie. She is remarkable. Her acting is done with such a feminine frailty. It is clear she holds a burden, one in which she wants to share with Gosling but instead holds the dilemma within. He explains he wont be back for an entire year. She agrees with this and again states she is okay and has nothing to say. Although it does not show in the movie that they were ever a couple, rather just maybe a one night stand.

The movie picks up a year later. Gosling is back in town for his risky motorcycle act and he stops by Ro's house ( the name of Mendes's character). Her mother is there, she is holding a white, blue eyed baby and her mother explains the baby belongs to Gosling.

This baby changes the course of his life. Prior to this knowledge Gosling is a free-living, wild, daredevil without a commitment in the world. Yet, that all changes when he sees his son. Unfortunately, Ro is in a relationship and tells him this. Nevertheless, he is committed to being a father. So he quits the bike riding stunts and dedicates his life to being a father, or trying to be.

Everything after this he does for his son, good, bad, law abiding or not. The movie takes the audience on unexpected turns. Gosling meets another loner man who compliments Gosling's fast bike riding skills and the two become instant friends. Bank robberies occur, violence, another fling between he and Mendes and moments shared with his son that are truly heartbreaking.

Ro never leaves her boyfriend and within time refuses Gosling the privilege to even see their son, Jason .

Bradley Cooper comes in shortly after this. He is astounding. He plays the good cop, fresh out of law school and focused on Justice. Ray Liotta who is fantastic in everything he acts in plays the corrupt cop. Although Liotta is always a pleasure to see on screen, this story line is a little fluffy, and could have been left out. But it paves the way for Cooper to show his good law abiding goody-goody side. Complete opposite to Gosling character.

There is a scene where Cooper's character Avery is in therapy, the expression on his face when asked a question, the real believability he is able to demonstrate, the sadness in his eyes, his expression, shows that Cooper is not just the funny man from The Hangover, but rather that he is a true talent with so much more to dish out in his career.

Sadly, Gosling is in half the movie. And trust me his absence is felt. I kept wanting more of him and this character that he plays with such a polarizing punch. He takes this bad boy loner, with nothing to lose and makes him something no one wants to see go. He has such great charm even in a tattooed hardcore biker role.

The biggest mistake the director did was to kill him off mid -way in the movie. I longed for more of him and really rooted that he would get a chance to be a father.

The director is Derek Cianfrance  who also directed Blue Valentine which also stared Ryan Gosling and is another one of my favorite films. The Place Beyond the Pines takes place throughout 17 years. You see the lives of many change and yet, stay in he same place with hurt and fear and regret.

A fathers blood runs deep and calls out even from the grave, sometimes the apple doesn't fall far from the tree and this movie shows this precisely. I can not say enough how Ryan  Gosling's acting was miraculous. For me, his best performance was in Half Nelson, he was also nominated for an Oscar for that film, and rightfully so. He played a crackhead high school teacher perfectly.

Yet, In The Place Beyond the Pines, he is better. He is amazing. He is movie-heaven-sent.. If he does not get an Oscar nomination and an Oscar for his performance in this movie there is no justice in the world. I hope you watch this film and enjoy it. It is worth watching at least four or five times. It will leave you in awe, deep thought and such an appreciation for real acting & great screenwriting. It will have you singing the praises of Ryan Gosling like a church choir on Holy Ghost fire.  *** perfection!!!