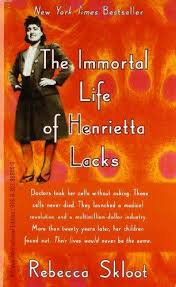 I purchased the book, The Immortal Life of Henrietta Lacks some time ago. I read and thoroughly enjoyed the book. It was not as I expected at all. I imagined it would contain plenty of science writing and lingo with a bit of a memoir feel to it and I would be completely lost. I had read past reviews of the book and I was intrigued, so I gave it a look. Boy was I mistaken. The book reads like a long, detailed, lovely explanation of what happened with this one woman- Henrietta Lacks and how that affected the lives of her children, and O what lives they lived minus a mom. It also is full of science facts, cells, justice, racism, and so much more. I was not able to put it down. The memory of the life and cells of Henrietta lived on in me long after I had closed the books cover.

Today, I just finished watching the HBO movie version of The Immortal Life of Henrietta Lacks starring Oprah Winfery and Rose Byrne. I must say, it can’t get any better than this. I’m typically a skeptic when it comes to books to film versions; I always watch with cynical eyes. Yet, once Oprah became “Oprah the actress”, “Oprah the Cillie” from “The Color Purple” all doubt, all cynical view flew away to the highest heavens, never to return.

The film is heart wrenching. Oprah gives a moving performance; I would venture to say that she saves the film. All the other actors and actresses were well played, Rose Byrne really holds her own alongside Oprah Winfery. But good god, Oprah steals the scene, the movie; I for a second actually forgot I was watching a book to film.

I still recommend reading the book, there is so much detail left out of the movie, so much vital information that should be known and that the film in less than three hours could not properly explain. However, with that said, I encourage a viewing of The Immortal Life of Henrietta Lack on HBO now, and have some tissues ready, it is a tearjerker. Also, pay close attention, it is not a book, where you can go back pages and reread something missed.

And keep a close eye on Oprah Winfery as she magically, powerfully does her acting magic.
Posted by Francie at 6:28 PM