Lately,  I have been doing minor research on my next writing project.  I traveled to Biola, CA, which was not much of a travel at all, a mere 20 mins or less from my home. Nevertheless, I went there on August 8, drove through the tiny city, took pictures, and attempted to get a feel of what life is like there.
The main street was wide and long. It was warm outside and locals sat outside of storefront buildings with their backs leaning against the walls, and their bottoms on the warm sidewalk. The town seemed desolate and silenced by the lack of opportunity. I clearly did not get what I was looking for. What I am writing has nothing to do with the history or town of Biola itself, rather, individuals and an animal having lived their entire life in a small town.
I do however, want to know as much about the area for sake of scenery, and also, I am nosey, when I write about a topic, I want to envision it all, from the smallest details to the largest. Knowledge is power. Therefore, I did some minor research on BIola and here is what I came out with. I think it is pretty freakin cool, and I am much more interested now than I ever was in how my characters will be shaped by this “Biola History”.
As the great songwriter Eddie Vedder once said, “A small town predicts my fate, perhaps that’s what no one want to see.”
Small-town minded people can be either a gem in rubble or the salt that covers a blister and who is to say what makes the difference in the two.
Biola stands for Bible Institute of Los Angeles. William and Mary Kerchoff founded Biola in 1912. There seems to be from what I gathered through articles a strong Molokan presence there. I have been unable to locate anywhere in writing that William and Mary Kerchoff were Molokans themselves. Although, I have a feeling that it is possible. When Molokans immigrated over here from Russia their names where difficult to translate, so many of them stand out by their last names having been translated incorrectly. Many have names ending in Volov ot Valoff or ending in off.
Molokans mean “milk drinkers” in Russian. Molokans are a Christian sect that refused to obey the Russian Orthodox Church. Molokans seem to be more like Quakers in daily lifestyle and they wear head coverings while in church, like many Apostolic and Penacostal churches I grew up in.


Biola is located just west of Fresno and north of Kerman. According to the 2000 Census report, its population is just over 1600. Last year the small agriculture town turned 100 years old. It celebrated this event with its annual Raisin Festival. This year it will hold its 57th Annual Raisin Festival and Parade on October 11-13th, complete with car show and royal crowning of the Raisin Queen & King.


I am curious what the parade will be like. I may have to attend the event and find out. From what I gathered over the past few weeks has intrigued me.
This is a picture from the main street. As one can see the wide, nearly desolate street is empty considering the time of day was just before 6pm. 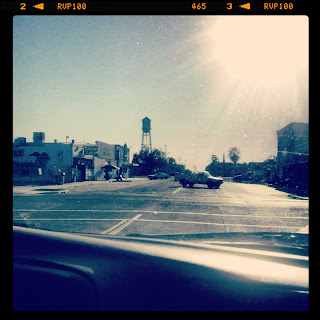 Francine McMillon
Penned Write
"for all your writing needs"
pennedperfectly@gmail.com
www.pennedewritebyfrancie.blogspot.com
(559) 777-0746
Posted by Francie at 9:34 PM