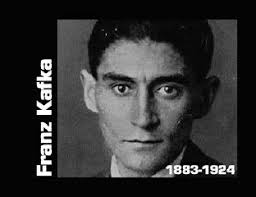 If you Google; as I Google, then you must have noticed todays new Google Doodle. It is Gregor Samsa from Metamorphosis, one of Franz Kafka’s most beloved and heartbreaking novellas. Today would have been Kafka’s 130th birthday.
He was born July 3, 1883 and died June 3, 1924, as an unknown writer. Throughout his lifetime and even at his death; he received none of the fame that he is so associated with today. On his deathbed, he asked his best friend Max to destroy all his work and never show it or submit it to the world. Had his friend obeyed Kafka, the literary world would have never known great works as, “The Trial” and “The Castle”.

Yet, nothing quite compares to “Metamorphosis”. It is such a somber read and by far my favorite. Kafka writes with such a deep sorrow and an immense amount of guilt in Metamorphosis.
Kafka’s main character, Gregor Samsa wakes to find he has metamorphosed into a vermin (I imagine him a cockroach, the big fat ugly, water-loving cockroaches, with long shitty-brown antennas). Eventually ,his family also becomes aware of his new body. He lives with his father, mother and sister and they never come to accept the transformation of Gregor.
Instead, they are disgusted by it. Moreover, Gregor at times just wants to help financially, as he once did, and love them. He is often read, gazing in awe of his sister or peeking out his room, while his mother sews and his father reads the evening paper, watching and lovingly embracing their life. Yet, even his best intentions are abhorred. In one scene, his sister is playing the violin while two male guests are visiting.
Gregor the cockroach is in his room, wounded by an apple that remains stuck inside his buggy body. An apple that his father threw at him in anger.  Gregor wakes from a nap to hear his sister playing and is in awe of the sound. He thinks to himself that he must not be so much of a vermin since he can appreciate good music.
As he crawls out of the room, hair and dust and all the trash the dirty floor holds, clings to his body. He intends to go out, praise his sister and climb on her neck, whisper how much he loves her and how proud he is of her, after all he did pay for her violin lessons and was one of her biggest supporters, prior to becoming a beetle.
Instead, he is seen as a horror and shortly after, left to die with the lone apple still embedded in his side. His family cannot fathom Gregor’s image any longer. So they leave him, in detest they abandon the son, brother that they once loved, and that cared and worked hard to provide a better life for them. Yet, now that Gregor is useless and physically putrid, crawling on the floor as a bug, eating as such, no long is he useful to them and their disgust of Gregor Samsa has reached the breaking point. Happily, they depart.
I encourage you to read this novella. I just told you the parts I loved; there are more images, words, emotions, scenes that are worth purchasing this gem of a book, reading, and adding it to one’s collection of literature.
So a big Happy Birthday to Franz Kafka. In remembrance I am making peanut butter cookies, because peanut butter is brown just like Gregor was in the end.

I skimmed and speed-read my book, once again, searching for one of my many highlighted favorite quotes and there were just so damn many. I think I lit the entire book in yellow. A true testament to how much I loved this book when I originally read it almost a decade ago, and cherished Kafka’s dark and beautifully woven words. Here is one of the many
quotes that I love. It shows the wonderful heart of a man turned cockroach. O Gregor!

“He thought back on his family with deep emotion and love. His conviction that he would have to disappear was, if possible, even firmer than his sister's. He remained in this state of empty and peaceful reflection until the tower clock struck three in the morning. He still saw that outside the window everything was beginning to grow light. Then, without his consent, his head sank down to the floor, and from his nostrils streamed his last weak breath.”
― Franz Kafka, The Metamorphosis


Francine McMillon
Penned Perfectly
For all your writing needs
Contact me @ 777-0746
pennedperfectly@gmail.com